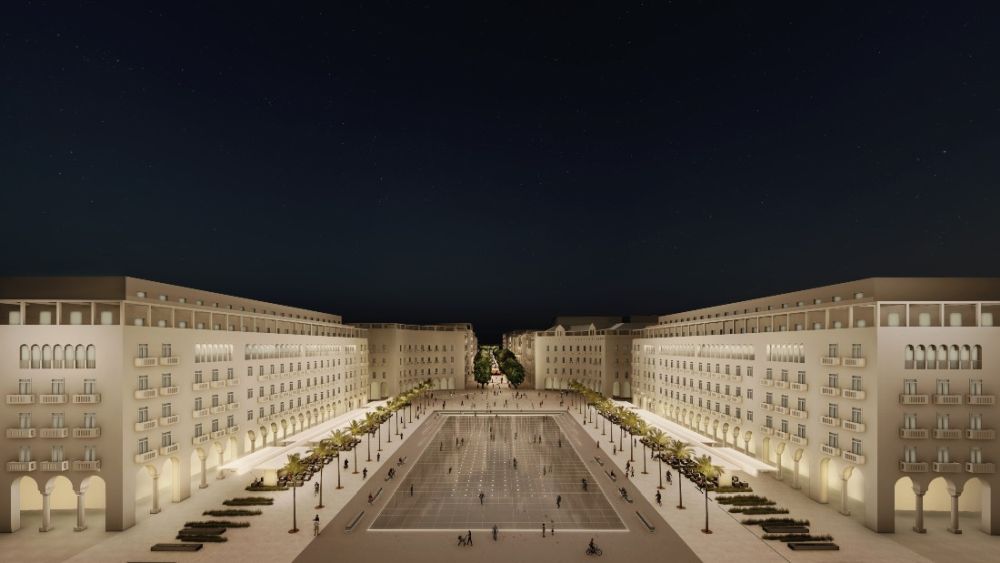 Large renovations are planned lately in Thessaloniki, following the example of Athens. The aim is to change the image of the city which presents a great lack of green and open spaces with the transformation of old industrial areas, emblematic points of the city and conversion of uses in several areas of the metropolitan area.

The spearhead is the renovation of the TIF which significantly donates blood to the city. An important plan is also the renovation of Aristotelous Square which is the trademark of the city. An equally ambitious plan is the regeneration of the coastal front from Angelochori to Kalochori. At the same time, there are important renovation plans such as the one in Menemeni and the stables in Papafi and in the Metropolitan Park of Pavlos Melas.

But as in any major project, in the two emblematic renovations of the city, there are disagreements and reactions, objections and counter-proposals. These focus on the proposals of the center which is also the meeting point in the daily operation of Thessaloniki.

The case of TIF

The renovation of the TIF space is a timeless conversation about Thessaloniki. In her case, two views prevail. One is to stay where it is and make a major intervention that will turn the area into an “exhibition city” and the other to move the TIF to the western suburbs of the city.

Officially, what is progressing is the stay and renovation of the TIF in the city center. An International Architectural Competition was recently completed, in which it won a bioclimatic architectural proposal by Mr. Sauerbruch Hutton (Germany), Mr. Gustafson Porter + Bowman (Britain) and Mr. Elena Stavropoulou (Greece).

The proposal envisages circular building complexes that look like floating islands while the space remains open and accessible to citizens. This is possible as it also provides for the creation of open semi-outdoor spaces under the canopies overlooking the park and the sea.

The next step is for TIF-Helexpo as the contracting authority to proceed with the architectural team in further studies for the technical maturation of the proposal.

At the same time, groups of citizens have been set up, as well as organizations, parties and politicians who demand the relocation of the TIF to the west, in Sindos, asking for the exhibition center to be moved and the current space to be turned into a green space.

The palm trees of Aristotelous Square

A few days ago it was announced the completion of another architectural competition concerning the renovation of the iconic Aristotle Square.

The proposal that received the first prize of the jury of the competition, according to the relevant announcement of the Municipality, attempts to highlight Aristotelous Street as the main thoroughfare of the modern metropolitan life and image of the city but also as an area of ​​connection with its recent history. . At the same time, what exists in the landscape is the water element and a series of tall palm trees. 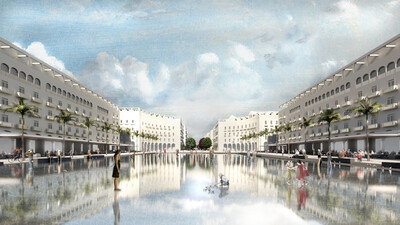 The latter provoked a series of reactions, mainly through social media who believe that this choice is not in line with the image of a metropolitan city that Thessaloniki wants to have. They scold the choice of palm trees and consider that the trees do not match the style of the city and that the square will not get the green it could while it could take advantage of the historical element and highlight it, but also that it will not have enough shadow. They also claim that due to climatic conditions the palm trees will not withstand.

In fact, yesterday there was a counter-proposal by the architect who designed the renovation of Nea Paralia, Prodromos Nikiforidis, who supported the solution of a mild intervention in which he notes that “the proposal seeks to offer a change in the qualities and functionality of public space and alternative perspectives that address all situations and needs of users: open – closed, introversion – extroversion, isolation – coexistence “.

The reactions brought the response of the Municipality of Thessaloniki with the Mayor of the city, Mr. Konstantinos Zervas to answer that “every part of the renovation in the square has its own aesthetics, its own tree planting, its own floor, quite a wet element. Commenting on the choice of palm trees, he noted that “palm trees are trees that can be seen in a large European city. My grandfather used to say that Thessaloniki also had magnolias, we will have such a planting “.

The renovation of the coastal front of Angelochori-Kalochori

An extremely ambitious plan is the renovation of the coastal front from Angelochori to Kalochori. The Special Spatial Plan is planned to be put up for public consultation and by the end of 2021 the Presidential Decree is expected to be issued.

It concerns a large renovation of 40 km with local interventions and will require architectural competitions, studies and of course a financial model that will undertake the implementation of this project. 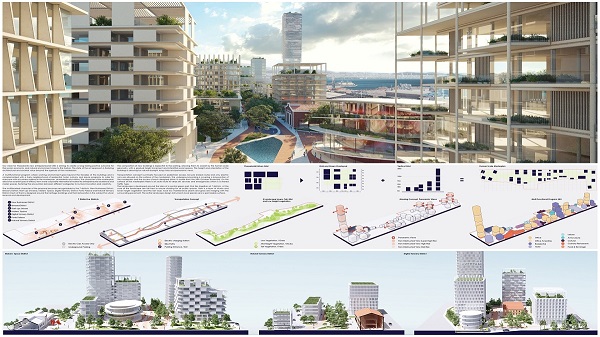 In summary, the Special Spatial includes the renovation of the old beach of Thessaloniki, the restoration of the issues on the coastal front of the municipality of Kalamaria, and interventions in the area of ​​the Concert Hall – Poseidon – Allatini (Eastern Metropolitan Pole of Culture and Sports), the farm of A the Eastern Metropolitan Park and the Botanical Garden in the area of ​​AUTh near the airport, the construction of a new shipbuilding and repair zone, etc.

The aluminum systems industry ALUMIL organized the international architectural competition ArXellence 2, for the radical renovation of the west coastal front of the city. Urban regeneration and infrastructure projects are included and the whole project resembles similar urban interventions found in coastal cities in Northern Europe such as Oslo, Stockholm and Copenhagen.

A local renovation on the west side of Thessaloniki has begun the municipality of Ampelokipi Menemeni, which to a large extent plans the creation of an urban park, the new Art High School and Lyceum “Dimitris Horn” as well as the new church “Ag. Polykarpou “. 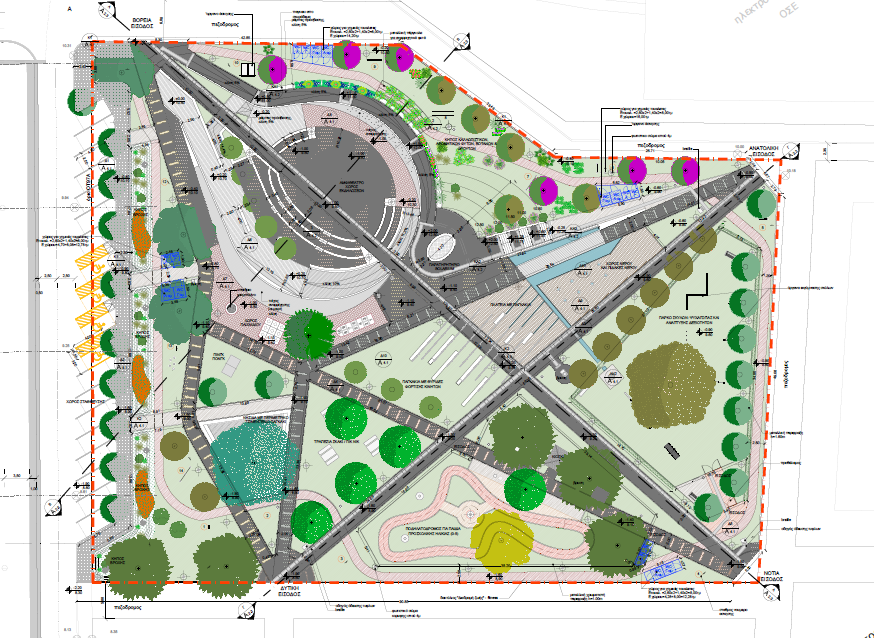 It is located in the Bosporus area in Menemeni. The project has approved funding, approximately 1.5 million euros from the NSRF 2014-2020 through the RDP of Central Macedonia.

The intervention includes major renovations with new sidewalks, corridors and greenery. The goal is to create an urban park in an area of ​​6.5 acres, while in another 4.5 acres the art school will be built and in another 4 acres the new sanctuary.

The renovation of the Metropolitan Park “Pavlos Melas”

The ambitious plan for the renovation of the former Pavlos Melas camp and its transformation into a Metropolitan Park is in an advanced tender process. 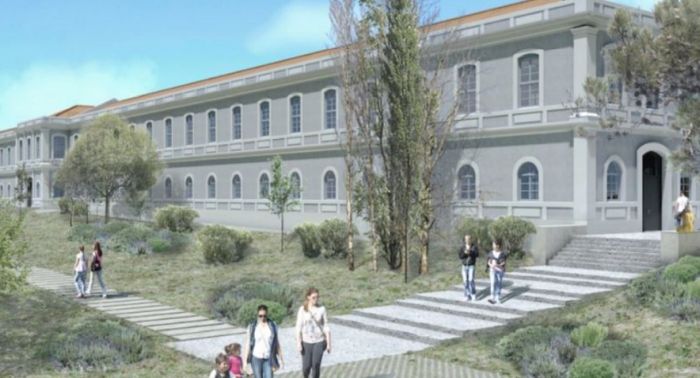 In the area of ​​the former Pavlos Mela Camp, a single perimeter fence is constructed and a total of 6 pedestrian entrances are formed, while in 4 of the 6 entrances, car parking spaces are formed.

The study envisages the creation of light structures: refreshments, pergolas, wooden and metal platforms – living rooms, and power and water centers. Existing vegetation will be enriched. In the project with a budget of 19.6 million euros, the contractor has been declared the Railway Works SA.

The planning of the Municipality of Thessaloniki for the renovation of the former stables of Papafi is progressing, which “is an emblematic intervention that will radically change the image of the Toumba area”. 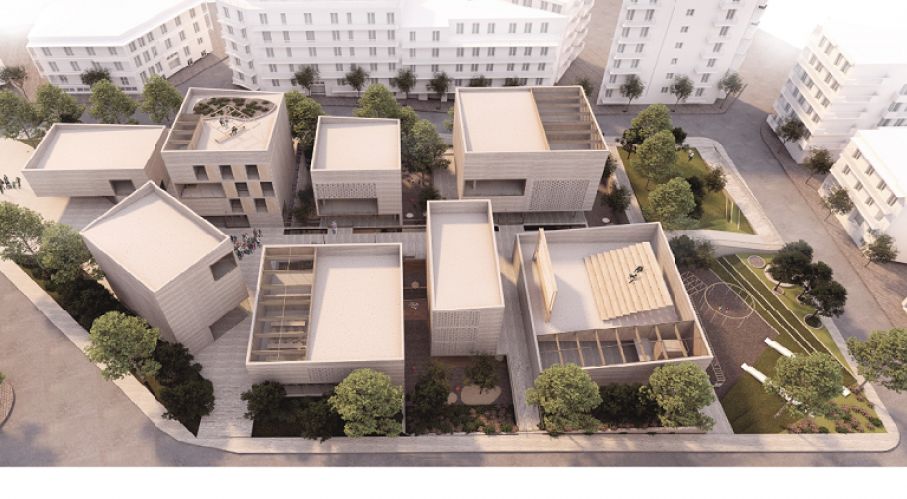 The elaboration of the relevant studies will be undertaken by the team that had won the first prize in the context of a complex open architectural competition for the design of one stage, which had been announced by the Municipality of Thessaloniki.

The plan includes the transformation of the former Papafi stables into a vibrant and creative multipurpose space, combining green, social structures, cultural and sports activities. The needs of the area are met, the urban environment is aesthetically and functionally upgraded and Toumba acquires a new reference point.