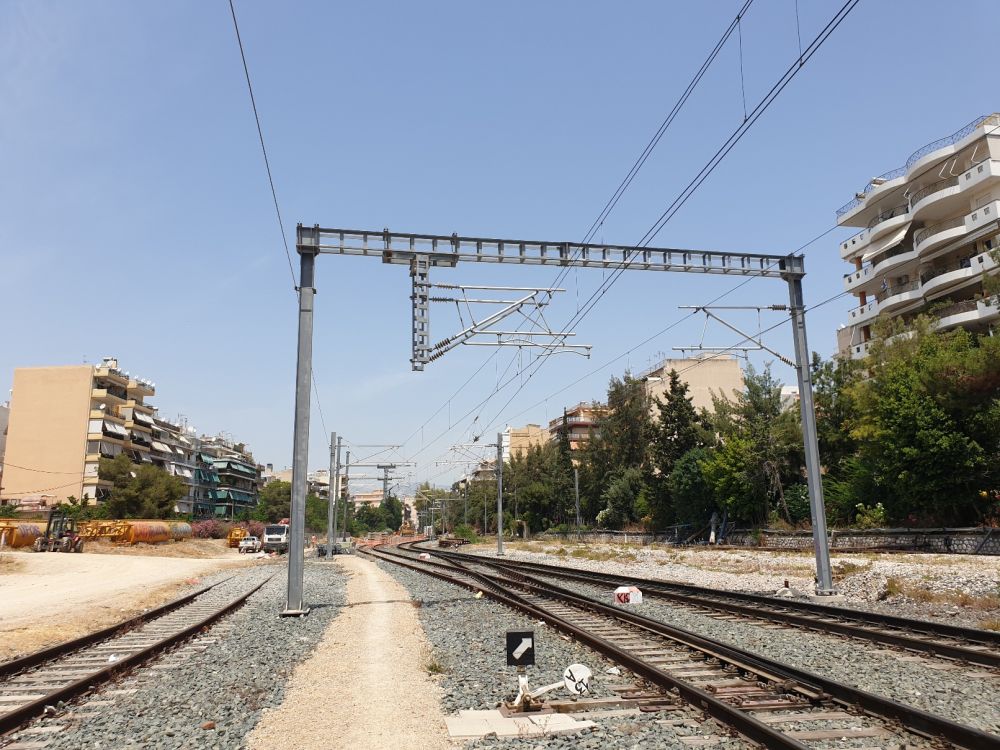 The railway projects in Greece in the last twenty years have a special place in the news that deal with projects. The highways may be more “glamorous” projects, but the fixed track projects and especially the train projects are among those that are of more interest.

An important factor is the fact that unlike the motorway network, in railway projects we are halfway there. The Athens-Thessaloniki corridor is basically the only one that is functionally upgraded and one can use the train on an express route in 4 hours.

The rest of the lines are either incomplete (e.g. the Athens-Patra line), or are local in need of upgrading (the Thessaly network), or require extensions like the Athens Suburban line.

At the same time, these projects are funded by major European programs (NSRF and CEF) and aim to improve the image of the railway network so that it becomes competitive with road and air (in some cases) transport.

Today we have collected the 10 largest ongoing railway projects implemented by ERGOSE and we will attempt to collect their footprint, when they are completed and handed over to OSE, which is also the infrastructure manager of the Greek network.

Today it is the largest ongoing contract on the Athens-Patra line. It concerns the creation of the infrastructure in the section from Psathopyrgos to Rio. Essentially it is a project that prepares the next contract for lines (structure), electrification, signaling and stations. The cost with VAT reaches 174 million euros. The works started in 2017 by GD Infrastructure and are expected to be completed in 2023.

2. Redistribution of Signaling by sections of the line Athens-Thessaloniki-Promahonas

The implementation of the contract in question is absolutely necessary as it provides the OSE with the possibility of full operation of signaling – remote control and therefore maximum safety in the movement of trains,

– provides the greatest flexibility in handling by reducing any delays, as the supervision of the line will be done by large Remote Control Centers

– provides the possibility, in combination with other subsystems, to develop a speed of up to 200 Km/h (instead of the current 160 Km/h) in large sections of the network, reducing the time of the Athens-Thessalonica route. The cost with VAT reaches 41 million euros. The contract was started in 2014 by the TOMI-ALSTOM scheme and is expected to be completed in the coming months.

The object of the project concerns the construction of a quadruple railway corridor of 2.36 km length, of which 1.91 km is degraded / underground, which starts from the exit of S.S. Athens to Thessaloniki (Km position 10+821) and ends at Treis Gefyres (Km position 13+181) in the Sepoli area of ​​the Municipality of Athens where it meets the constructed and operational quadruple railway corridor.

The cost with VAT reaches 151 million euros. The contract was started in 2018 by the INTRAKAT-RAIL WOfRKS scheme and is expected to be completed in 2025.

The object of the project is the conversion of the existing single gauge line of Isthmus – Loutraki into a standard gauge electrified line and its final connection, in the area of ​​Isthmus, with the existing High Speed ​​Railway Line (HST), of the Suburban Railway operating between Kiatos – Corinth – Airport. The cost of the project including VAT is 14.8 million euros. The contract was started in 2018 by the MYTILINEOS-XANTHAKIS scheme and is estimated to be completed in the coming months.

The scope of the project concerns the construction of the 2 new railway bridges (ascent – descent), in Km position 9+184 of the Thessaloniki – Florina Line, which are planned to replace the existing metal bridges. The cost of the project including VAT reaches 8.9 million euros. The contract was started in 2019 by RAILWAY WORKS and is expected to be completed in the next period.

6. Electrification of the Larissa-Volos Line

Briefly, the scope of the project concerns: the construction of a new single standard gauge railway line, in the section from Km position 49+184 (before the entrance of S.S. Latomeiou) until X.Th. 59+677 (entrance to R.S. Volos), to replace the existing non-functioning, metric or mixed gauge, line in the section, installation of electrification and a new stop at BIPE. The project costs 82.8 million euros. The contract was started by INTRAKAT this year in May and has a duration of three years (2025.

7. Signaling of the Thessaloniki-Idomeni Line

It concerns the installation of a modern signaling system, as well as ETCS – level 1, in the Thessaloniki – Idomeni section, and replacement of 37 track changes, for signaling needs. The beginning of the project is limited to R.S. TX1 (entrance from TX2) and the end at Idomenis station (Km position. 77+521 – end of S.S. Idomenis, measurement T-E). In the Polykastro – Idomeni section, the project extends along the new variant of the line. The total length of the axis of the existing single railway line Thessaloniki (TX1) – Idomeni (via the new variant Polykastro – Idomeni), on which the signalling, remote control and ETCS system will be installed, is approximately 70.5 kilometers. The cost of the project is 56.7 million euros. The contract started in March this year and will last 30 months (2024). The projects are implemented by the AVAX-ALSTOM scheme.

8. Electrification of the Kiato-Aigio Line

The project concerns the construction of an electrification system with two 150kv/25kv/50Hz power substations with a power of 2X15MVA and a 25 kV/50Hz overhead contact line system, with remote control (SCADA) from the traffic control center. The cost of the project is 84 million euros. The contract started in July this year and will last 30 months (2025). The projects are implemented by the TERNA-MYTILINEOS scheme.

Briefly, the object concerns: Complete construction of the new docks No. 1, 2 & 3 after their roofs and construction of the foundation of the future facilities of level +1+2. Completion of construction of the large underground pedestrian crossing of R.S. Athens about Km position 10+300 under the new platforms No. 1, 2, 3 including the shell of the stores inside the underground passage, the stairs, the escalators, the elevators and the connection to the Attiko Metro “Larisis” Station. The cost of the project including VAT is 42.1 million euros. The contract started in July this year and will last 30 months. The projects are implemented by the scheme INTRAKAT-RAILWAY PROJECTS.

It concerns the construction of two platforms on either side of the existing high-speed rail lines (HST), each 150 meters long and 4 meters wide, a stairwell with an elevator, a 30-meter long earth retaining pile wall on the upper side of the HST platform, as well as two metal roofs on the docks, each 35 meters long. The cost including VAT is €1 million and the works were started by SOLIS in 2021.

The Ellinikon: the 1bln euro investment for the new Integrated Resort Casino to start in Q1 2023