Olympia Odos, the road that currently leads us from Elefsina to Patras (and in the future to Pyrgos) is a modern highway that has, in addition to important road infrastructures that ensure safety and speed, a modern concept of operation. On the axis of Olympia Odos, technologies such as water from air, proportional toll charging etc. have been introduced for the first time in the country.

With the same logic, Olympia Odos proceeded with another pioneering environmental and road safety enhancement project and completed the intervention for the first “white tunnel” in the country. In the “Theseas” tunnel in the area of Kakia Skala, an intervention was made that we have never seen before and admittedly the result is impressive. In addition to painting a large part of the tunnel’s concrete cover white, the road surface was also painted white.

The intervention that created the “white tunnel” is, beyond an obvious innovative project to increase road safety levels, an environmental project at the same time. According to sources, this pilot program has already exceeded the expectations of Olympia Odos, since the preliminary measurements foreshadow a large reduction in energy consumption.

The promising project is essentially the beginning of a new era for Olympia Odos as it will be very likely that we will see more tunnels “white” out of the numerous tunnels of the highway in the future.

The initiator of the idea is Fabrice Breton, Chief Technical Officer of Olympia Odos. As he commented on ypodomes.com, “the pilot test for a light-colored road surface was successfully implemented in the “Theseas” tunnel, for the first time in Greece. The positive environmental impact of this practice is twofold and results from the reduction of energy consumption on the one hand, and from avoiding the replacement of the asphalt on the other, where both translate into a reduction of carbon dioxide emissions and are in accordance with the environmental policy and commitments of shareholders of Olympia Odos (VINCI Concessions, Hochtief PPP Solutions, AVAX, TERNA, AKTOR) for the climate and the circular economy”.

In fact, as Mr. Breton emphasizes, the first lighting measurements are very promising, as energy savings show that they can reach up to 50% of today’s reduced consumption due to LED lighting. “We will continue to closely monitor this pilot application and once it is confirmed that under these conditions of color and pavement marking, the good experience recorded in the European Practices is also recorded in the Theseas tunnel, the new technique will be developed and applied to other tunnels of Olympia Odos” he points out.

How the idea of the “white tunnel” came about

Giorgos Paterakis, Traffic & Pavement Manager, also spoke about the issue at ypodomes. As he reveals, about a year ago the Technical Director, Mr. Fabrice Breton, presented to the Directorate the idea of ​​applying White asphalt “with a twist”, following a presentation of a material for road surface repairs. The twist was that it is not required to replace the existing asphalt, as in the traditional method successfully applied in countries such as France, Italy and Austria, but the coating of this material, after appropriate modification.

Regarding the time required and the resources required, Mr. Paterakis stated that “the design involved a number of stages, such as modifying the composition, creating test tiles to check the reflectivity characteristics and checking the technical brochures for the confirmation of functional characteristics. At the same time, the issue of the striping, which could not remain the familiar white (on a white background), and the necessary traffic regulation, as well as the conduct of checks based on international literature, had to be settled. The final stage concerned the approval of the study by the Public Service. For all of the above, as the Technical Directorate of Olympia Odos, we collaborated with our consultants and contractors for about 9 months”.

How many and what were the phases of the project?

The project developed in the previous days in the “Theseas” tunnel in Kakia Skala. The process was impressive and below you can see photos of the course of this intervention with the end result of the road surface becoming white. 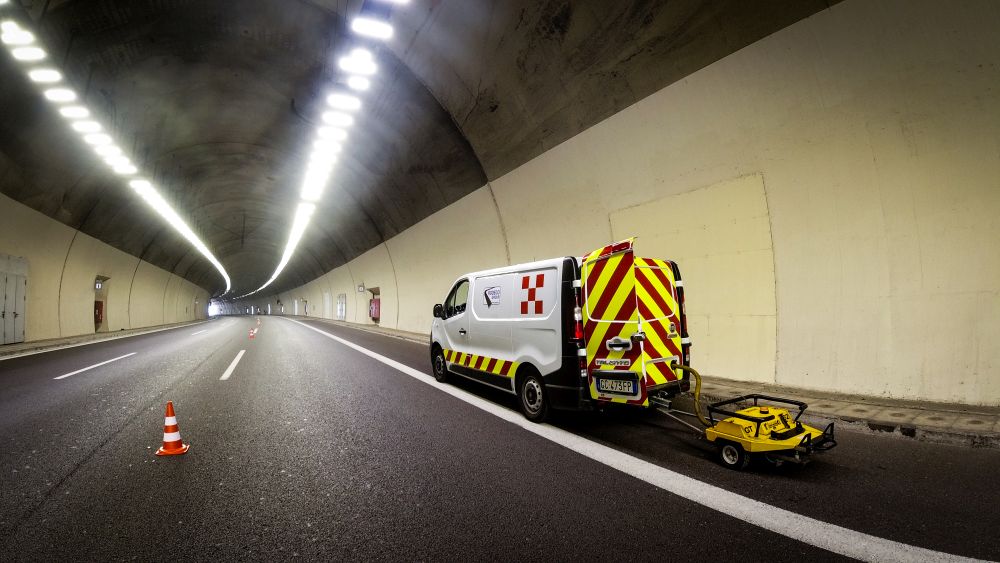 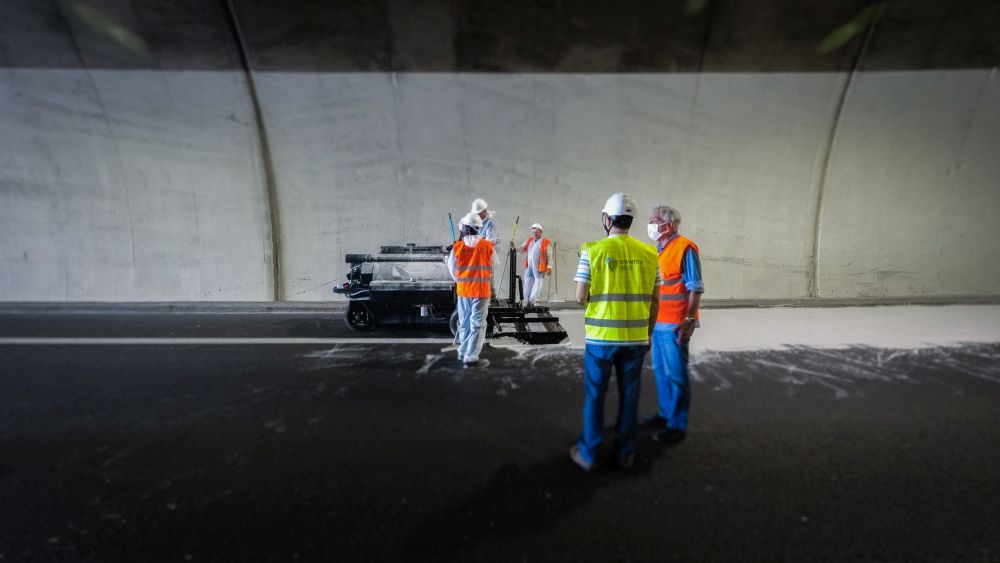 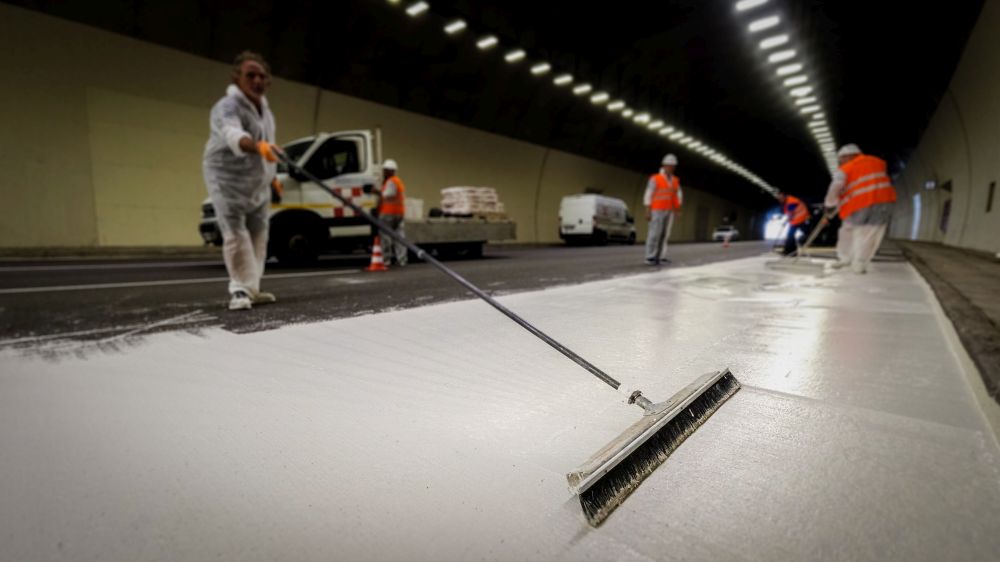 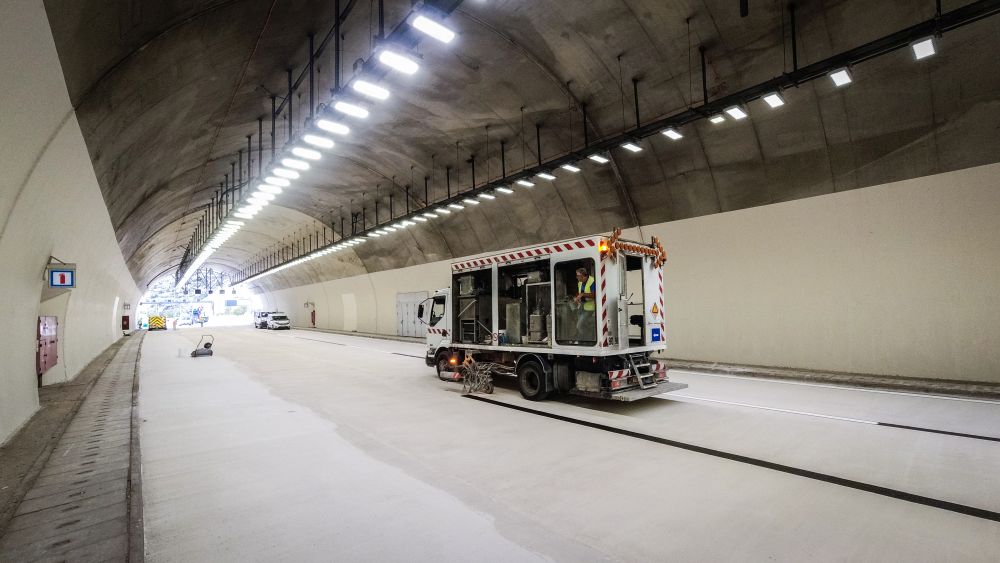 A project in progress

However, the project is ongoing. The drivers may have seen the white color and already have a first driving experience, but for Olympia Odos do we have to wait for more with its final form/light setup?. According to Grigoris Hasanis, Electromechanical, Tolling, IT Manager at the company, a series of measurements will immediately follow to confirm the new lighting level according to the initial study. This is expected to be finished by September and by then the final lighting adjustments will be made.