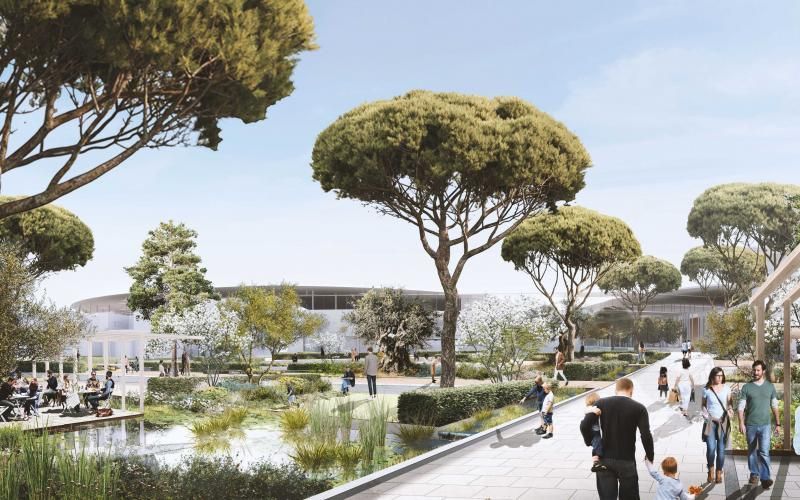 The great urban project of Thessaloniki, which concerns the famous regeneration of the TIF in the heart of the city, is progressing. Yesterday, the completion of the preliminary study was presented, which gives a new and different “green” image and will be renamed ConFEx Park.

According to that, in the area of ​​the property that occupies a total of 175 acres, the building will cover 91,000 square meters, approximately 12% less than today. In more detail, the Conference Center and the three pavilions will have an area of ​​69,000 sq.m. The 51,000 pertain to the three pavilions and the 18,000 to the Convention Center.

On the north side of the property, the Business Center will be created, consisting of four buildings (hotel, two commercial buildings, one multipurpose). The area of ​​greenery is multiplying and a large park will be created with endemic plants from the wider area of ​​Thessaloniki, the space will be permeable and accessible to pedestrians and cyclists, while areas for sports and entertainment for the residents have been provided. An amphitheater for outdoor events will also be built. ConFEx Park will be served by the Sidrivani Metro station.

At the same time, conservation is planned for the Palais De Sport, the OTE Tower, the building of the Macedonian Museum of Contemporary Art and the Arch Gate on the side of YMCA, as well as the former Esso Pappas Pavilion.

The new site will include a 1,700-space underground parking lot. The important thing is that 55% of the new Exhibition Center will be open space with gardens and architectural configurations, water features and paths. What is being attempted is the creation of a green center that citizens and visitors to the city will be able to access.

At the same time, rainwater will be used for irrigation, while photovoltaics on the roofs of the buildings will cover part of the energy needs. Overall the park’s energy footprint will be reduced by at least 20%.

The buildings will use geothermal energy and seawater for cooling, and cross-flow ventilation with the help of heat recovery from the exhibition spaces will reduce energy consumption through mechanical ventilation.

The preliminary study and plans for the competition

The preliminary study was presented by the architectural firm Sauerbruch-Hutton, Gustafson Porter + Bowman & Elena Stavropoulou Arch. that a year ago had won the 1st Prize in the international architectural competition that TIF had issued.

The next steps are to complete the studies very quickly, by 2023, so that the PPP tender can be launched to raise the necessary funds needed to build the new building. The big goal is that in 2026 the new TIF, COnFEx Park will be presented and give a new lease of life to the city.

The total investment is estimated at 280 million euros together with the maintenance-operation period by the contractor. With its implementation, it will become the largest regeneration project in Thessaloniki and one of the largest in Greece.

The Greek motorway network will pass the 3.000 km length threshold by 2030