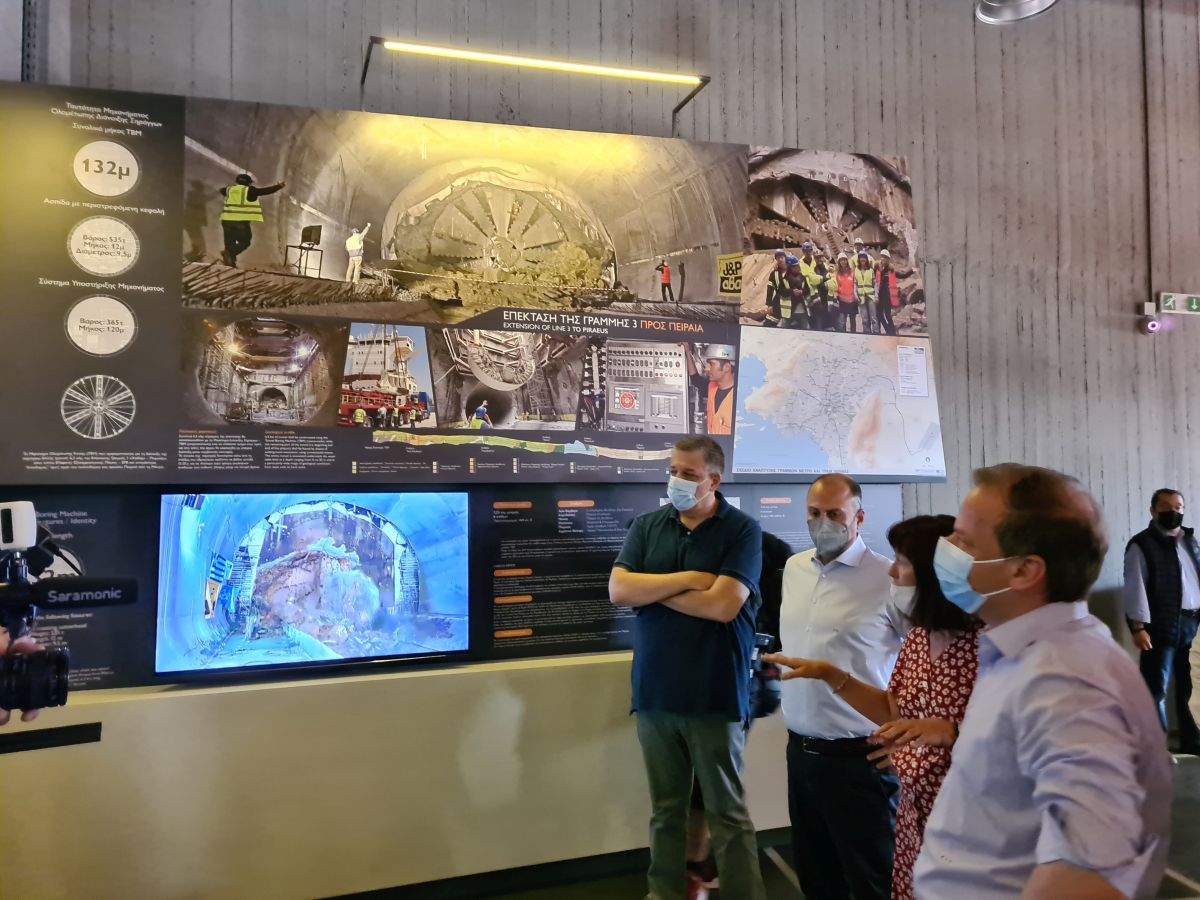 The works for the extension of the Athens Metro to Piraeus pass in the final stretch. During the visit of the Minister of Infrastructure and Transport, Costas Karamanlis, at the construction site of the station “Municipal Theater” was once again reported on the completion and delivery in operation in the summer of 2022.

The minister was first guided to the “Xylapothiki” where all the archaeological finds have been collected and have emerged in a really impressive place. Part of the Hadrian’s aqueduct, the city’s sewerage and objects. It is estimated that more than 10,000 objects are in the area. The Minister was accompanied by the General Secretary of Infrastructure, George Karagiannis, the CEO of Attiko Metro, Nikos Kouretas and the President of Attiko Metro, Nikos Tachiaos.

The project of extending line 3 from Nikaia to the Municipal Theater includes the stations Maniatika, Piraeus and Municipal Theater. The three stations will cover densely populated areas of Piraeus, while the terminal is in the heart of the business and commercial life of the city.

With this extension, line 3 will connect the center and the port of Piraeus with the center of Athens, the northern suburbs and the airport with a line that will reach a length of almost 50 kilometers. In particular, the Piraeus station will create a large transport hub, while its construction complexity has made it one of the most technically difficult Metro stations in the country.

In statements he made after the completion of the visit, Mr. Karamanlis stressed that since December 2019 he had announced the completion of the expansion for 2022 and that many had not believed that this would be possible. “With our visit today, we saw that the project has progressed a lot. Piraeus will become a major transportation center that will operate the Metro, Tram and Suburban. We will connect the largest port in the country with the largest airport in the country in 50 minutes “.

He pointed out that a large Metro project is also a great opportunity to highlight archaeological finds. The Municipal Theater station will be a Museum station with the display of these findings, where a pebble floor dominates.

The Mayor of Piraeus, Giannis Moralis pointed out that it is now visible that there is impressive progress and the project is “running”. He noted that there is anxiety for the Metro to join the city and start operating. “Piraeus will become one of the largest transport hubs in Europe with the presence of Metro, Tram, Suburban and Port” said Mr. Moralis.

The operation of the Tram extension is on its final stretch

Regarding the operation of the Tram extension, Mr. Karamanlis noted that on Thursday there will be a BoD. in the Municipality and if the decision is positive, in the next 20 days tests will begin to put the new line into commercial operation.

Remember that the demolition of a building that has been declared protected and has been blocked due to its static condition of the extension operation is pending. The building has caught fire twice and a part of it is left.

The undergrounding study of the Faliro-Piraeus section is being updated

Regarding the undergrounding of Metro line 1, from Faliro to Piraeus, the minister revealed that the implementation case is on track as the study is being updated so that this difficult but at the same time important project can proceed and we are even thinking of including a process to shorten the times to complete studies faster. “The project is on a very good basis,” said Mr. Karamanlis.